In every moment, your life is speaking to you. Do you hear it? Sometimes it is ever so faint. Listen.  Most often, if you’re like me, we coast on auto-pilot. Numb, really. Simply going through the motions of everyday life, but what about when a thought simply pops into your head?? Sure, minds are designed to run non-stop with ideas, feelings, and more… But when something enters your mind out of nowhere, then it is not your thought. Pay attention!!!

Listen to your inner voice. ALWAYS. It is your BFF (best friend forever) for life. The quiet voice within NEVER lies. Never leads you astray!! Consider it your inner-warning system which is a combination of insight, intuition and instincts. Sometimes it is a feeling… Ever feel the hairs on the back of your neck rise? What about a cold chill for no particular reason? Other times an actual voice inside beckoning you to do something, call someone, or perhaps think better of a decision… for your own good!! 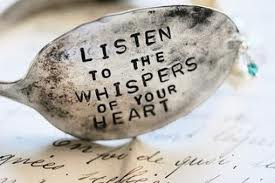 Where does the voice come from, anyway? Some believe it is God speaking. Others believe it is your angels… perhaps even your guardian angel most times. While others simply think it is your conscience. It could even be your soul/spirit guiding you in a particular direction.  Maybe it is a grand culmination of all of these sources? I’m not particularly wise enough to know the answer, but whatever IT happens to be… when it speaks to you… LISTEN UP!!

It has taken me years to start to pay attention to the voice in my head. I’ve made the mistake… too many times to count… of ignoring my inner voice. Sometimes you don’t even know what exactly you’re hearing or what it means for that matter. Maybe there is a lesson for you… other times it is a signal that danger is near… or maybe a desire to do something… or perhaps it is urging you to be an earth-bound angel by assisting someone in need.

My inner voice has blessed me upon countless occasions. I’ve learned to heed the call when my inner-warning system goes on high alert. Let me share some examples where this has come into play and how it has transformed my life. 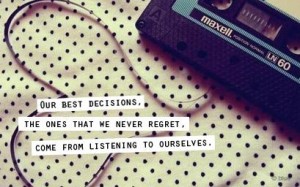 The summer before my college junior year, I was home during break… doing a big bunch of nothing in particular with my time. One day, I was driving around aimlessly and I drove past the street where my friend Theresa lived. All of a sudden, I made a U-turn and stopped by… unannounced. Dunno why, but something inside told me to stop by and see how she was doing. Keep in mind, I hadn’t seen or talked to Theresa since high school graduation three years earlier.

When I was younger it always made me ANGRY when people misspelled my name. Now, I know my parents picked an unusual spelling for Renae, but dang it… if you KNOW me, then you damn well better know how to spell my name. When I met Theresa during my junior year at a new high school, she never could remember how to spell my name, so she made a game out of it. Even signing my yearbook, “Renaeeaaeaae, fun for me to say and spell…” From her it didn’t make me mad. It was cute. It was endearing. We made it an inside joke. To this day she is the ONLY one who could get away with it!! LOL!!

Upon arriving at her door, in true fashion, she greeted me with “Renaeaeaea!!” And, we picked up right where we left off. We sat on Theresa’s bedroom floor, chatted up about college life, discussed how college was different yet the same as high school in many ways, shared our hopes and dreams and gossiped… trying to catch each other up on what was going on in our lives. She mentioned she was surprised I stopped by… well, truthfully I was too!!! We had a great conversation. Theresa was leaving to return to college soon, so it was really nice to catch up.

Then I got the call. Theresa had suffered a brain aneurism. She was talking to one of our friends on the phone. During the call, Theresa mentioned “her head hurt… it really, really hurt” and then she was silent. September 3, 1993 she died. Theresa was gone.

My friend passed away only a matter of months after her 20th birthday. Yep, I was sad. I was shocked. How could it be? And I couldn’t believe I was just with her less than a few weeks earlier. Would I have said anything different had I known that would be the last time I would ever talk with her? The last time I ever heard her sweet voice? It was later in my life that I realized that when someone crosses your mind for no apparent reason what-so-ever, pay attention. You may need them. They may need you. Take action. Reach out!!

Most recently, I was out running errands on my own. My friend D ran through my mind. Hadn’t talked to her in ages and hadn’t seen her in even longer. I followed my own advice: she crossed my mind, so I sent her a quick text. She invited me to go shopping and then dinner with her that night. Later we spent hours looking for new clothes.

Due to an injury that forced her immobile for months, D had put on a few pounds and was in desperate need of new duds until she could get the extra weight off (which we both knew would simply be a matter of time). Like most of us, the idea of buying a LARGER size in anything is overwhelming and maybe even self-defeating. She had put off shopping for too long and was now busting at the seams of many of her clothes. It was time. D confided in me she didn’t want to endure the simple truth that she had put on weight. Buying a larger size made it real. I’ve certainly been there at some point… completely nerve-racking… not to mention a blow to my  ego. I could dig it.

After a whirlwind shopping trip, D had everything she needed. Ohhhhh, it was great fun. At dinner she told me, “Thank you so much. If it hadn’t been for you… I probably would have found something else to do rather than force myself to shop!! And I’m thankful you are the type of person who is brutally honest, so I’m confident everything I bought looks great on me because you would tell me if it didn’t.” This made me smile!!!

See, I followed my inner voice. I’m so happy I listened. D needed me to provide her strength to do something she didn’t really want to do. We spent hours and hours talking in the process. It truly was a phenomenal night. Completely random? Yep. FABULOUS? Hell to the yeah!!!

Pay attention to your life. Fine tune your hearing to pick up the faint voice within yourself.  Never miss an opportunity. Go inside. Magnify. Turn up the internal volume and if necessary turn down the external volume that may muffle your focus. Your voice is there for a reason; whatever it may be… to guide you; to protect you; to help you make memories; to allow you to help others. And even when you don’t even realize it… to say goodbye to a dear friend and loved one before his or her time on this earth is gone!!!!

48 thoughts on “Adjust the Volume…”